This article will discuss each of these six parameters in detail.

The patient’s perceived exertion is a way of estimating the intensity of the physical activity. It is based on the subjective physical sensations experienced during exercise, including increased heart rate, increased respiratory rate and depth, increased sweating, and muscle fatigue. Although this is a subjective measure, it provides a fairly good estimate of the actual workload. The perceived exertion may be graded from 0 (none) to 10 (maximal exertion) or according to the Borg scale. The Borg scale is well validated at ranges from 6 (none) to 20 (maximal exertion). Notably, a high perceived exertion at low workload is a strong predictor of adverse outcomes.

Chest pain during exercise is one of the strongest predictors of coronary artery disease. The severity of the pain may be graded from 0 (none) to 10 (maximal pain). It is important to clarify whether the pain provoked by exercise is similar to the pain that leads to the stress test (if that was the reason for conducting the test). Chest pain rated as 6 or above (according to the 10 point scale) should prompt termination of the stress test (refer to Termination criteria during stress testing).

Exercise does lead to tachypnea (increased respiratory rate), which should, however, be distinguished from dyspnea which is shortness of breath. Dyspnea may be due to poor exercise capacity (with normal ventilatory capacity and cardiac output), diminished ventilatory capacity, diminished cardiac output or an angina equivalent. Note that women, diabetics and older individuals with coronary artery disease may only present with dyspnea (which is then considered an angina equivalent). Notably, terminating the test due to dyspnea is associated with a worse prognosis than termination due to chest pain.

Exercise performance is probably the single best predictor of risk for future adverse events in healthy individuals, those at increased risk for cardiovascular disease, and actually all patient populations. This is true independent of other traditional risk factors. The correlation between exercise capacity and survival is almost linear, meaning that survival increases along with increased exercise capacity.

Performance is estimated using the maximal heart rate, rate pressure product, duration of the test and the patient’s perceived exertion rating. The combined results of these parameters indicates the patient’s exercise capacity. For example, if the patient reaches the age expected maximal heart rate, a high rate-pressure product and endures the entire test without rating it as extremely hard, he or she has an excellent exercise performance. Inability to reach 85% of the age expected maximal heart rate is associated with an increased risk of cardiovascular and overall mortality. Coronary artery disease, sinus node dysfunction (chronotropic incompetence), heart failure, left ventricular dysfunction, poor physical fitness, pulmonary disease etc are common causes. Note that some patients may perform well below their actual capacity without any medical explanation; it is important to motivate the patient before and throughout the test so that he or she perform maximally.

Please refer to the previous paragraph.

ST segment depression is measured anywhere between the J-60 point and J-80 point. The J-60 point and J-80 point are located 60 ms and 80 ms, respectively, after the J point (Figure 2). As usual, the PR segment is the reference (baseline) level. The magnitude of the ST depression is simply the difference (in millimeters) between the PR segment and the J-60/J-80 point.

Study Figure 2 (below) carefully, as it illustrates the J point, J 60 point, J 80 point and the baseline to which these points are compared.

The typical ischemic ST depression is illustrated in Figure 3, below.

ECG leads V4, V5 and V6 are the best leads to detect ischemia during exercise. These leads have the highest sensitivity for myocardial ischemia, which means that the probability of detecting ischemia is highest in these leads. The limb leads are less sensitive in terms of detecting ischemia. However, ST segment depressions in lead -aVR suggest severe myocardial ischemia (multivessel disease or left main disease).

Note that some patients only display ST depressions during the recovery period. This is explained by the fact that myocardial workload increases once the patient is placed in supine position (the preload of the heart increases because of increased venous return in supine position).

Figure 5 (below) illustrates the ECG reaction of a male with coronary artery disease.

In patients with ST segment depressions on resting ECG (e.g due to left ventricular hypertrophy), the ST depression is measured from the initial level (at rest) of the J-60/J-80 point (and not from the level of the PR segment). Moreover, if there are ST depressions at rest, additional ST depression induced by exercise will not be as specific to ischemia as is otherwise the case (unless the depressions are very pronounced).

A 58 year old male is admitted to the emergency room due to chest discomfort. He has experienced chest discomfort almost daily during the past few months. His resting 12-lead ECG was normal, as were laboratory tests, including troponin T. The exercise stress test revealed myocardial ischemia (results below). The patient finally underwent coronary artery bypass grafting (CABG) due to left main disease. Below follows all test results.

2. ECG reaction in the limb leads 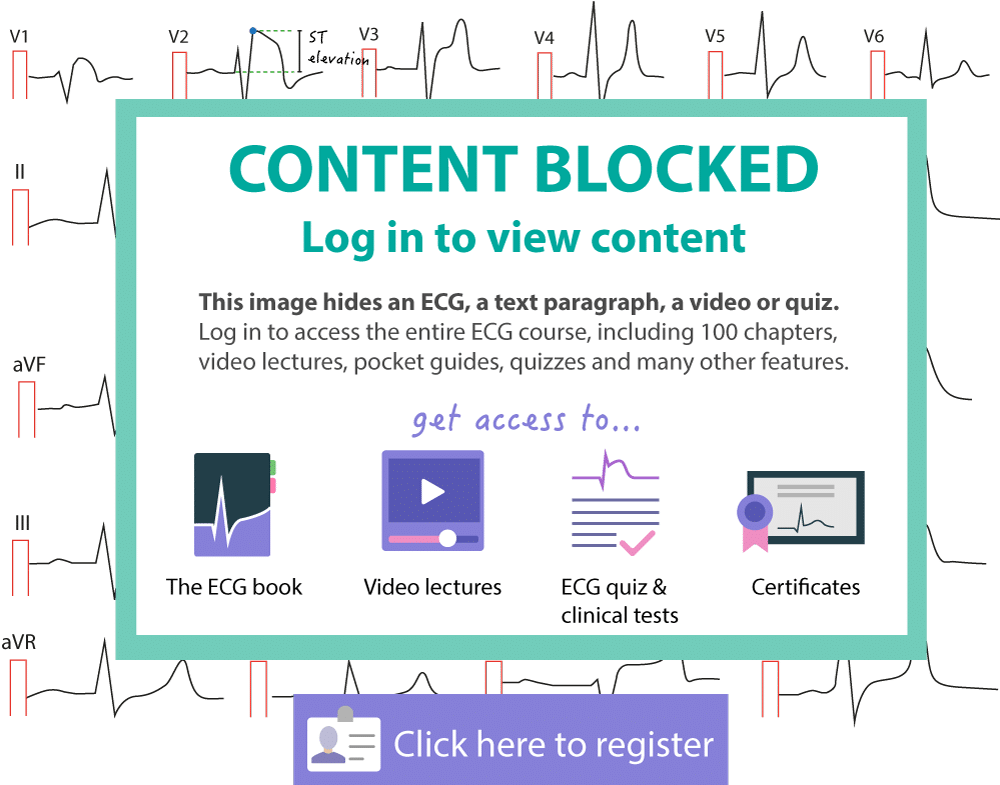 The magnitude of the ST depression (in mV, where 0.1 mV = 1 mm) is divided by the heart rate increase during the test. An example follows:

This parameter is calculated automatically in most ECG machines. It is the slope of the linear association between the heart rate and the amplitude of the ST depression. An ST-HR slope greater than 2.4 mV/beat/minute is significant.

The implication of ST elevations during exercise depends on whether they occur in leads with or without pathological Q-waves.

ST elevations in leads without pathological Q-waves are rare during exercise stress testing. Such ST elevations indicate transmural ischemia, i.e ischemia that affects the entire thickness (from endocardium to epicardium) of a myocardial region. This type of ischemia requires a (more or less) complete obstruction of blood flow, which may be explained by the following:

Importantly, the stress test must be terminated if ST segment elevations occur in leads without pathological Q-waves.

Reciprocal ST depression may be evident in each of these cases. If transmural ischemia cannot be ruled out, then the test must be terminated.

ST depressions and T-wave inversions that are present during rest but disappear during exercise indicate an abnormal reaction. If the patient has a high pre-test probability, this should lead to suspicion of myocardial ischemia.

Supraventricular and ventricular arrhythmias may occur during exercise. This is more common in persons taking digoxin (digitalis) and those with coffee or alcohol in their blood. The subendocardial ischemia induced by exercise rarely induces any serious arrhythmias. In fact, exercise may actually suppress arrhythmias that are present at rest. For example, ectopic atrial arrhythmias may be suppressed when the sinoatrial node accelerates its discharge frequency; ventricular extrasystoles (premature beats) may also be suppressed during exercise. This has no prognostic implication.

Sinus arrhythmia and sinus bradycardia may occur during or after exercise. Atrial fibrillation and atrial flutter occur in 0.1% of all tests.

Occasionally, ST segment depressions are only seen during the recovery period (the preload of the heart increases in supine position). The duration of the recovery period is 6 to 8 minutes, during which the patient must be monitored. The test is completed when all parameters have returned to their baseline values.