It is often important to be able to determine the localization of myocardial infarction and ischemia, as well as being able to determine which coronary artery that is iccluded, and where the occlusion may be located. As discussed below, this may facilitate diagnosis of ischemia and infarction, and it may also guide management. For example, administering nitroglycerin (to alleviate ischemic chest pain) may cause hemodynamic collapse in patients with right ventricular ischemia/infarction; therefore, it is crucial to recognize ECG signs of right ventricular ischemia/infarction. Most clinicians will benefit from this knowledge. For cardiologists – particularly interventional cardiologists – this knowledge is of paramount importance as they must be able to directly pinpoint where the coronary artery occlusion is located (it affects the selection of coronary catheter). The term culprit – which means “the guilty one” – is used to denote the occluded coronary artery. In the vast majority of cases, it is only possible to determine the ischemic/infarct area (and thus the culprit) if the ECG displays ST segment elevations. However, there are a few distinct ECG syndromes (e.g Wellen’s syndrome, de Winter’s sign, global ST segment depressions) in which it is possible to determine the ischemic/infarct area despite the absence of ST segment elevations.

The coronary arteries: a brief overview

Figure 1 is important, as it shows the coronary arteries and their relation to the ECG leads. Note that Figure 1 is a right-dominant system (i.e PDA is supplied from RCA).

Figure 2 is also important to study, as it shows the arterial supply of the conduction system.

Overview of the relation between leads with ST segment elevations and ischemic area. 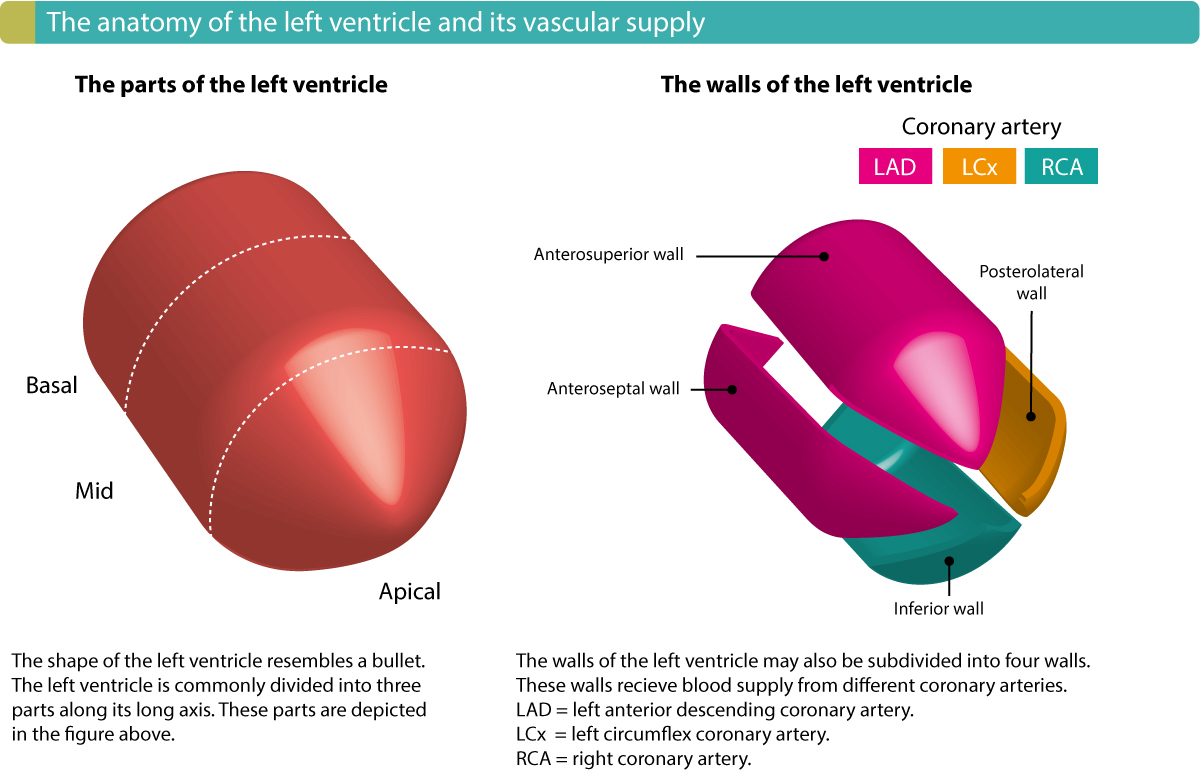 Localization of the ischemic area will now be discussed.

Occlusion in the right coronary artery

Occlusion in the RCA causes inferior wall infarction in individuals with right-dominance (i.e if the RCA gives off the PDA, which is the case in 90% of all individuals). If the occlusion occurs proximally, it may affect the blood supply to the right ventricle and thus cause right ventricular infarction (this is uncommon). Occlusion in the RCA may also cause posterior wall infarction. Details follow.

Occlusion in the LAD causes anterior infarction. ECG changes and extension of the infarction depend heavily on the site of the occlusion. The more proximal the occlusion the greater the infarction and the more pronounced ECG changes. ST-segment elevations may be present in leads V1–V6, and frequently aVL, I (the latter two may be affected because the diagonals given off by the LAD supplies the apical part of the lateral wall). There are virtually always reciprocal ST-segment depressions in III and aVF.

Distal occlusion in LAD – Occlusion distal to the first diagonal and first septal will spare the basal parts of the anterior wall. The ST-vector will be pointed more downward. ST-segment elevations are seen in V2–V6. There are no ST-segment elevations in V1, I or aVL, and no reciprocal ST-segment depressions in II, III, aVF and -aVR.

Occlusion in a long LAD (“wrap around LAD”) – If the LAD is very long and supplies a significant portion of the inferior wall, occlusion may cause inferior ST-segment elevations. Thus, a very distal occlusion in the LAD may be somewhat deceptive.

Occlusion in the left circumflex artery

Inferoposterior infarction – If LCx gives off PDA, occlusion will cause inferior infarction as well, and thus ST-segment elevations in II, III and aVF (occasionally also in aVL, I, but rarely V5–V6).

Because LMCA is the origin to LAD and LCX, occlusion will cause massive infarction, with very poor prognosis. One should suspect occlusion in the LMCA if there are ST-segment elevations in most ECG leads (in persons with left-dominance, it will include the inferior wall).

5/5 (5 Reviews)
error: Contact us for permission to use contents. Permission will be granted for non-profit sites.