Role of the electrocardiogram (ECG) in exercise stress testing

It is a common misunderstanding that the ECG is the main parameter of the stress test. The ECG reaction is indeed important but several other parameters are equally important. In fact, a large body of evidence demonstrates that the strongest predictor of cardiovascular and overall mortality is the maximal (peak) oxygen uptake, which is a measure of cardiovascular fitness and exercise capacity. In clinical practice, however, it is difficult to achieve the peak oxygen uptake because it requires maximal exertion, which patients rarely achieve. Patients are usually limited by leg fatigue, discomfort, cardiovascular disease, lack of motivation etc. Moreover, measuring peak oxygen uptake is technically arduous and therefore peak work intensity is used as a proxy for peak oxygen uptake. This is discussed in detail below.

The purpose of the exercise stress test is to induce cardiovascular stress in order to provoke symptoms, ECG changes, blood pressure response, heart rate response, as well as assessing limiting determinants of exercise capacity. These parameters offers diagnostic and prognostic information which can only be obtained during physical exercise.

Independent of other traditional risk factors, exercise capacity is one of the single best predictors of risk for future adverse events in virtually all patient populations, including apparently healthy individuals.

Exercise stress testing in the age of non-invasive cardiovascular imaging

Advances in computerized tomography (CT), cardiac magnetic resonance imaging (MRI) and echocardiography have enabled functional and anatomical imaging of cardiac anatomy, assessment of coronary artery stenosis and myocardial ischemia. These methods have greater sensitivity and specificity than exercise stress testing. Yet, the exercise stress test is still the first choice in the vast majority of cases with suspected coronary artery disease, as well as for prognostication of patients with known coronary artery disease. This is explained by the fact that the stress test provides acceptable sensitivity and specificity; stress testing is readily available; it is cheap; the competence to perform the test is widespread; it is not dependent on the examiner and it does not confer any harmful radiation. Last, but not least, stress testing offers outstanding opportunities to assess exercise capacity, cardiovascular response and limiting determinants of exercise capacity. Ultimately, the exercise stress test remains as one of the most important and frequently used diagnostic instruments in medicine.

Although exercise stress testing is almost synonymous with assessment of coronary artery disease, the procedure can be used for several other purposes, as follows:

Cardiopulmonary exercise testing (CPET, ergospirometry) provides assessment of the integrative exercise responses involving the pulmonary, musculoskeletal and cardiovascular systems. This allows for a more comprehensive assessment of these three organ systems. CPET is non-invasive but technically more arduous than traditional exercise stress testing. Use of CPET has increased steadily in the past few decades. The pulmonary measure of main interest is the gas exchange, which is analysed continuously during the exercise. By analysing oxygen levels, carbon dioxide levels, respiratory volumes, respiratory frequency and oxygen uptake, it is possible to estimate cardiac output and peak oxygen uptake, which is the best measure of exercise capacity. Ergospirometry is frequently used for prognostication of heart failure and pulmonary disease.

Exercise testing is a safe procedure. Over six decades of experience and research testifies that the risk of complications is very low. It is estimated that approximately 1 death and 2 acute myocardial infarctions are caused per 10.000 tests performed. These estimates vary slightly in different studies, depending on characteristics of the patient population.

Although exercise testing should not be directly compared with long-distance running, due to differences in type of work load and the health condition of the participants, it could be interesting to compare the mortality in these two situations. Approximately 1 in 184.000 participants in long-distance races experience a sudden cardiac arrest (JH Kim et al, NEJM). It follows that the risk is roughly 18 times higher during exercise stress testing. This figure should be viewed in the light of the differences in age, risk factors, coexisting conditions etc, between those performing exercise tests and those performing a marathon.

Despite the safety of stress testing, patients must be selected with care in order to minimize risk and maximize usefulness of the procedure.

Exercise stress testing is still the first choice in patients with suspected ischemic heart disease if the probability of disease is intermediate. In other words, the usefulness of exercise testing depend on the patients probability of having ischemic heart disease. One must therefore always begin by assessing the patient’s probability of having ischemic heart disease. This approach is referred to as a Bayesian approach, named after the statistician Thomas Bayes. The Bayesian approach states that the probability that the test will reveal disease, depend on the patient’s risk of actually having the disease. This is referred to as pre-test probability. The pre-test probability depend on risk factors such as age, sex, symptoms, cholesterol levels (particularly LDL cholesterol), smoking status, diabetes status, dietary habits and so on. Assessing all these variables can be quiet cumbersome, which is why the European Soceity for Cardiology (ESC) suggest are more pragmatic assessment including only age, sex and symptoms. These three variables are sufficient to estimate a pre-test probability. This will be discussed in detail below.

Thus, pre-test probability is fundamental to assess before referring patients to exercise ECG. It is also important that the patient is capable of performing the test. All patients are not capable of walking on a treadmill, or bicycling, while other patients are not capable of following instructions or communicate verbally. Patients with rheumatic conditions, amputations, severe claudication etc, may also have difficulties performing the test. These factors must also be taken into consideration.

It is also important to assess whether there are changes on the resting ECG which may impair evaluation of the ECG reaction during the test.

Presence of significant ST-T changes on the resting ECG may impair evaluation of the ECG reaction during exercise. With respect to the ECG, the purpose of the exercise test is to provoke ischemic ECG changes (ST segment depressions). However, there are several conditions that cause ST-T changes (including ST depressions) on the resting ECG and presence of such will generally make ECG interpretation during exercise more difficult. For example, some conditions may cause ST-T changes which both simulate and mask ischemic ECG changes. The most obvious example is left bundle branch block (LBBB), which causes marked secondary ST-T changes (including ST elevation, ST depression and T-wave inversion) and also masks ischemic ST-T changes. Hence, patients with left bundle branch block on resting ECG should generally not be referred for exercise ECG.

Patients using digoxin (digitalis) may also display significant ST-T changes, particularly ST depressions, on the resting ECG. Such ST depressions are usually generalized, meaning that they are evident in most ECG leads. Digoxin should be withheld 24 hours before exercise testing.

Patients with pre-excitation (Wolff-Parkinson-White syndrome) with delta waves on the resting ECG may not be suitable for exercise ECG. Delta waves are usually associated with secondary ST-T changes which may also impair the ECG interpretation of ischemia.

There are also patients with ST segment depressions on the resting ECG without any obvious explanation. As a general rule, if the ST depressions are <1 mm, then the exercise test may be useful.

Note that right bundle branch block (RBBB) does not interfere with detection of ischemia; i.e it is fully possible to detect ischemia in the presence of a right bundle branch block. Readers familiar with the appearance of RBBB may know that it is associated with ST depressions (in the J-60 point) in leads V1–V3, but this is rarely a problem because in case of myocardial ischemia, ST depressions are rarely confined to V1–V3 because depressions are virtually always seen in V4–V6 as well.

Pre-test probability is easily calculated in two steps, according to guidelines from the European Society for Cardiology (ESC).

Step 1: Classify symptoms according to the following table 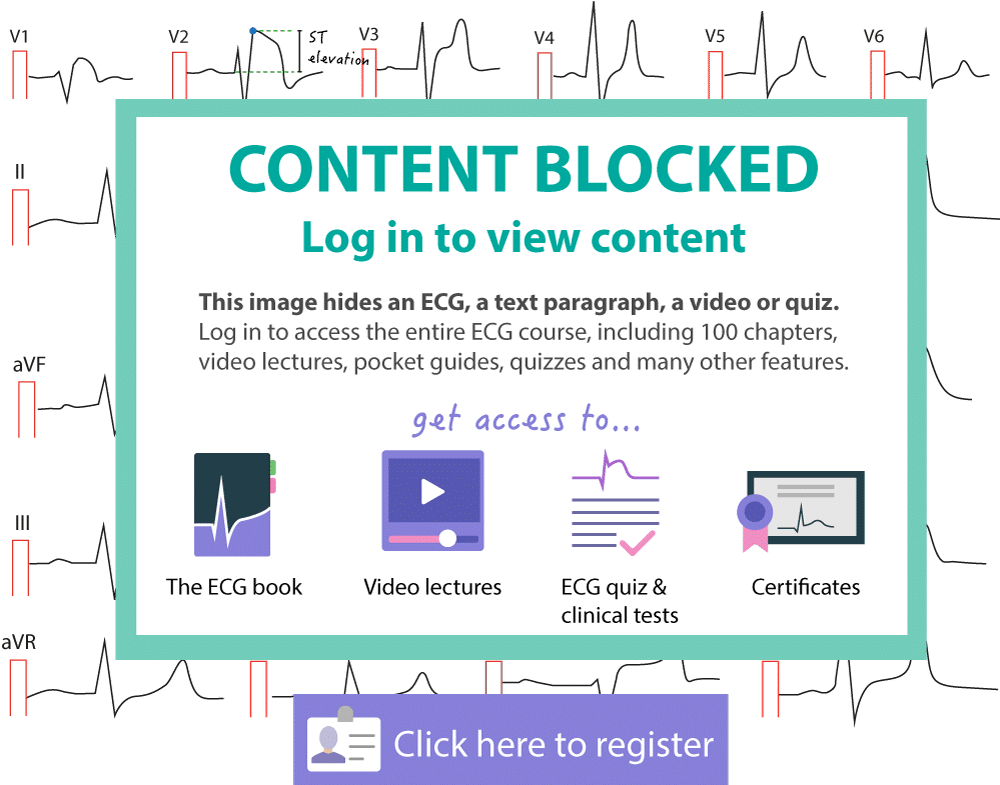 Sensitivity and specifictiy of exercise stress testing depends on several variables, such as prevalence of the disease in the population, the criteria used and so on. The sum of all evidence indicates that sensitivity is around 60–75% and specificity is 60–85% for exercise stress testing. However, sensitivty is lower in people with one-vessel disease (<50% sensitivity) and higher in those with three-vessel or left main stem disease (>85%).